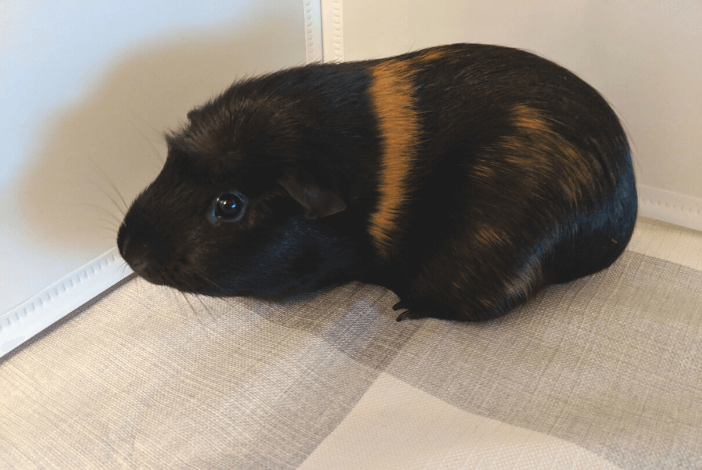 It’s a sad day here at Surrounded By Animals. Dash passed away this morning so we thought we’d spend some time remembering her life.

They weren’t named for a few days and the name actually came to me from watching I’m a Celebrity as they were doing morse code – hence Dot & Dash.

Dot has a ginger dot on her head while Dash had a ginger stripe on her so the names fitted perfectly. 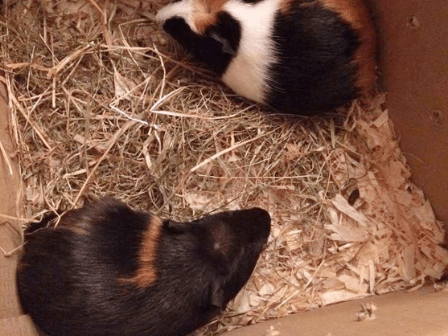 They quickly settled into their new home and Dash lived up to her name. Every night while we were having dinner she would zoom around the edge of the cage. She was also really fast and difficult to catch.

However, she was happier to be held and stroked than Dot was. She’d happily sit on your lap while Dot can’t wait to get away and explore.

I ordered them a new, bigger cage! The C & C cage had just arrived when uh oh. A dodgy bag of hay with some bird feathers in and they’d got lice. I definitely wasn’t putting them in their lovely new cage with lovely new fleece bedding with lice! So, the baths began.

They had to be shampooed and rinsed twice each and then again a week later. Poor things had only ever experienced one bath in their whole lives and now they’ve been washed 4 times in one week.

But it worked. The lice were gone. The new cage was ready. They were so excited and did lots of popcorning once they were in. Even Dash did a few popcorns which was a rare occurrence for her.

I volunteer at my local rescue centre and fell in love with Duke. He ended up coming home with us but first he had to be introduced to Dot & Dash. They had an easy bonding and happily became husboar and wives. I adopted Duke and brought them all home on 29th November 2017.

Now, Duke didn’t have a very nice first home so he was a bit dirty. I decided to wash all three of them together which would also help with the bonding process as they would then smell the same. 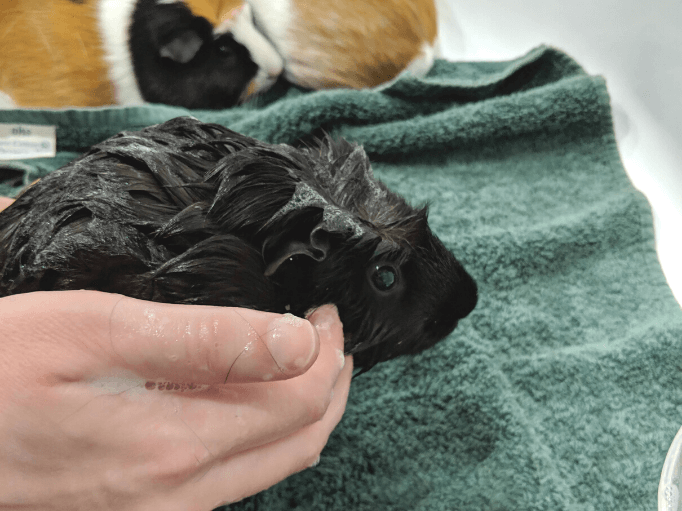 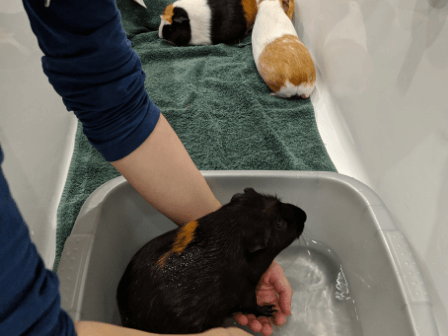 Dash & Duke were closer than he was with Dot. They tended to sleep closer together. 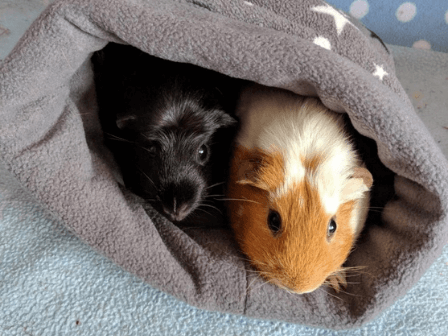 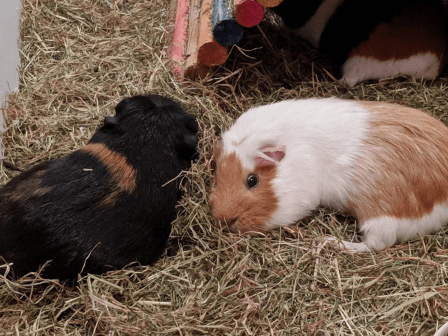 Dash even magically became Duke in one of the pictures I took! 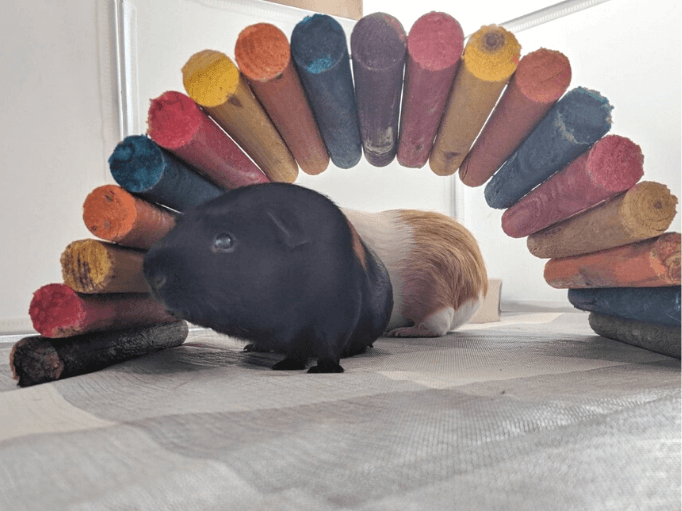 When you’re a guinea pig, there’s always time for nap. You might even use your fleece cushion as a duvet. 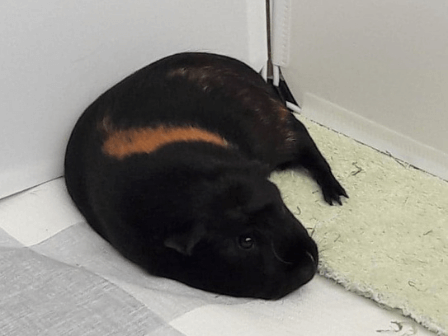 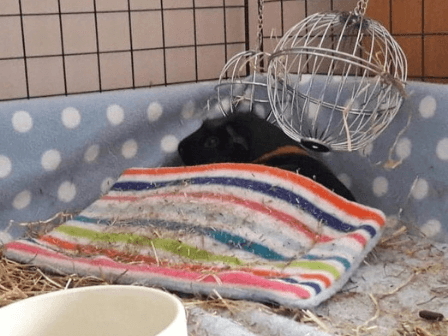 Earlier on this year, Dash did some modelling work for Surrounded By Animals & The Badgers Den. She posed alongside Dot & Duke for our new guinea pig hammocks. She could often be found snoozing underneath the hammock when off-camera. 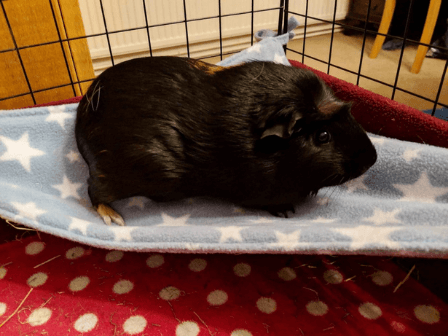 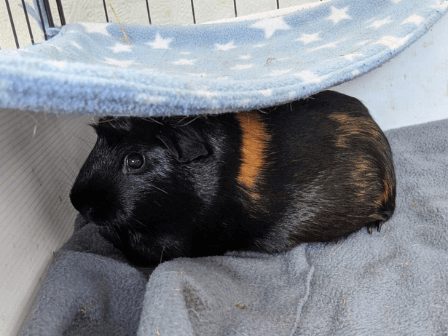 Dash was a super model for The Badgers Den, showing people how to use the magic paper to capture their pet’s paw prints.

Here are her tiny paw prints! and the resulting silver charm that was made from them. Now I’ll always have her paw print to treasure. 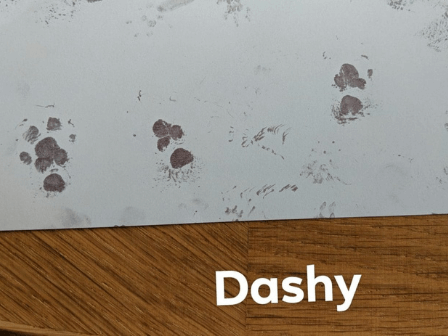 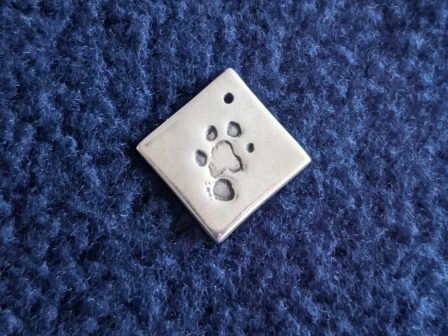 The beginning of the end

The rest of this post may be upsetting for some 🙁

I went in to feed the piggies, and Dash was not up at the bars with the others as usual. I scooped her up out of the cage and had a look at her. Her eyes were really runny and she seemed lethargic so I rang the vets straight away. She had an appointment for 3pm.

I put her back in the cage and she tried to walk away but was really wobbly. She also had a slight head tilt but I wasn’t sure if that was due to the wobbliness or not.

I decided to separate her at 1:30pm to be able to check whether she was going the toilet normally or not. I also tried to give her some critical care and some water as she wasn’t eating or drinking but she didn’t take very much of either.

3:15pm – waiting patiently outside the vets for the phone to ring. No owners are allowed inside at the moment due to Covid-19. The phone rings and I explain what’s happened. He goes through lots of things that it might be: some kind of infection (ear, upper respiratory), E. Cuniculi, didn’t look like there was anything in her mouth so probably not dental, he thought she might have some small ovarian cysts and some others that I just can’t remember now.

The vet gave her a painkilling injection as well as an antibiotic injection. He prescribed her some more antiobiotics, told me to continue syringe feeding the critical care and offering her favourite snacks to her, as well as some Fibreplex to keep her gut moving.

When she was brought back out to me, I opened the box and stroked her and she did such loud wheeks to be re-united with me.

6:15pm – Time for another attempt at syringe feeding. Once again, I got covered in it but hopefully she managed to get some. She still wouldn’t eat her favourite pepper though.

8:40pm – Let’s try again with the syringe feeding. She was super keen to spit a lot of it out so I’m not sure how much she got this time. I put her back in the cage and she was still really wobbly.

10pm – I built a make-shift cage/run next to my bed so I wouldn’t have to go too far for the night time syringe feeding.

10:55pm – one last attempt at syringe feeding before I go to sleep. I also had to try and give her the Fibreplex which was much harder than it should have been. I managed to get some in her mouth but she didn’t swallow it so I scooped it back out again. My best friend (also a vet nurse) came over to help me. She managed to get a good dose of critical care into Dash as well as the medicine. By this point, Dash had started breathing noisily which was worrying.

00:05am – Dash is resting in the cage now after her medicine and Dot has come to lay beside her. 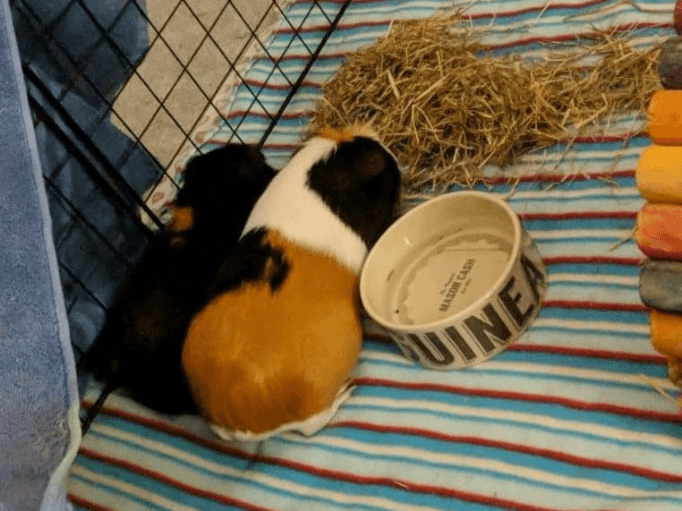 2:15am – my alarm is going off. It’s time for the next syringe feed. I turn on the light and I can see Dash has gotten worse. She’s breathing really hard and is floppy. She’s twitching slightly too. I scoop her up out of the cage onto a towel on my lap. She’s really not well. I just sit with her and talk to her and cuddle her. She takes her last breath.

After I had my time to say goodbye, I knew I had to put her back into the cage to let Dot & Duke say their goodbyes.

They came over to her and Dot nuzzled her face. Duke is on her other side nuzzling her back. After a minute, they sit either side of her facing each other and start quietly squeaking to each other. It was quite cute until Dot stopped…to eat a poop!

A while later and Duke is curled up next to Dash with his head resting on her. Dot is laying down on her other side so I decide to go to sleep (4:30am…)

9:15am – I’m awake and they’ve left Dash’s body now so I decide it’s time to remove her. I’ve put her in a box snuggled in with hay before burying her.

Goodbye Dash. I love you. 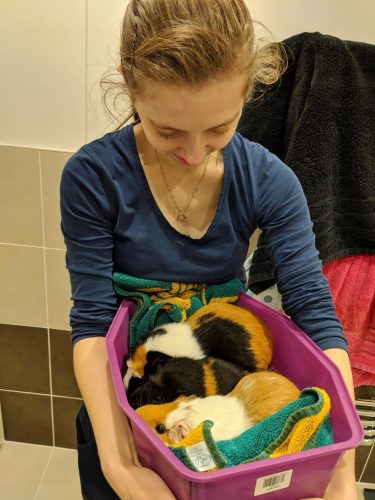 Dot & Duke were really down today. They barely ate this morning and spent most of the day hiding in the towel that Dash was on. Dot ventured out around lunchtime for a strawberry but Duke wasn’t ready. I could tell he was really missing Dash. Eventually, I coaxed him out at about 4pm with a slice of pepper.

I cleaned their cage and put them back in, knowing that the three of them would never be in there together again.

You will be missed Dashy, sleep well.

How to make C&C cages for guinea pigs

Step-By-Step Guide To Sexing Guinea Pigs: Is it a boy or a girl?

Do you know these interesting facts about guinea pigs?

Item added to your cart

0 items in the cart

Continue Shopping Go To The Cart